The new Litku Klemetti album Kukkia muovipussissa will be released in March 2021. Tour de France is the second single from the upcoming album. Sanna approached me with the script for the video in October 2020 and we were set out to shoot in December but had to cancel at the last minute because of an electrical problem at Sanna’s house. Then we had to cancel because Anna-Mari couldn’t get out of Helsinki due to the snow storm. We moved the date one more time because it was going to be minus 20 degrees celsius in Jyväskylä. When we finally made it to Jyväskylä in late January 2021 I was actually very happy because by then there was a lot of snow. It really helped with the lighting and looked great on camera. 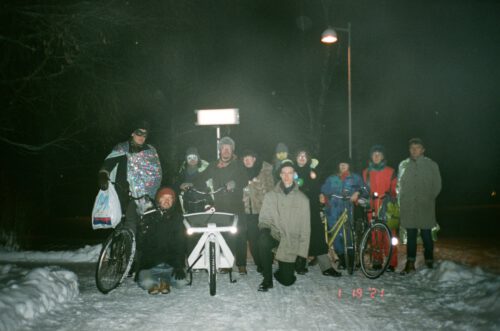 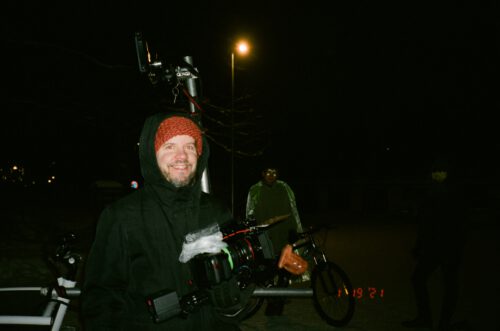 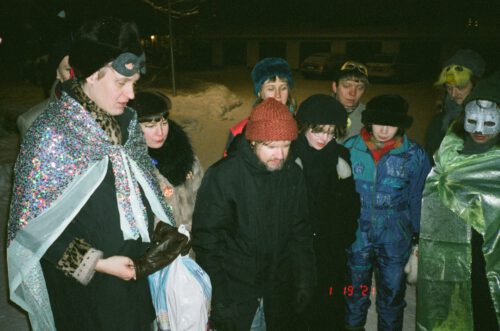 The band had already scouted the area a little before we arrived and we found a nice little street that turned into a curved path and ended by the side of the lake. We began the ride at a spot that was brightly lit by street lamps so that you could see the gang of bikers properly at the start of the video. Moving along to the small path the street lights became fewer and the mood changed which worked well for the video. For the party that happens at the end we chose a spot in front of a bright street lamp that would provide some backlight. There was also a great view of the lake and a ski jump tower – a proper party spot.

The student union of the university of Jyväskylä lent us the electric cargo bicycle – thank you! I can’t imagine how we would have shot the video without it. Pekka Tuomi was driving the cargo bicycle and I was scooped inside the cargo box with the camera on my shoulder. We did a few test rides and were pretty happy with how it all worked and looked. We also soon realised that it would be extremely difficult to time the ride exactly to the song. We decided we would just do as many takes as it would require. Only limit was the amount of smoke grenades I had with me so we’d have to manage with ten takes. 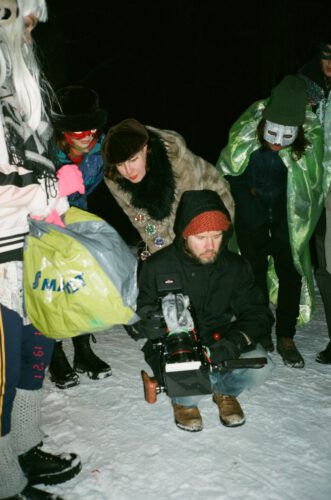 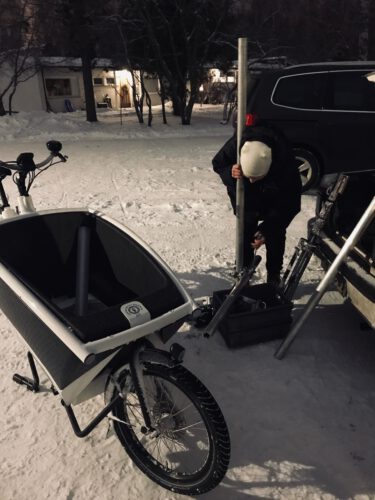 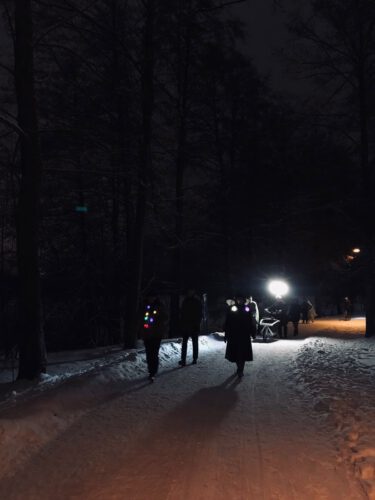 Anna-Mari rigged aluminium tubes on the cargo bikes rear rack so that we could hoist a Mini Mix led light above Pekka’s head. The Mini Max was our main source of light powered by v-lock batteries – everything had to of course be battery powered. The whole lighting look was inspired by the flash photographs that Anna-Mari took with her film camera during the shooting of the Eleanoora Rosenholm: Moskova Metro music video. We fell in love with this Cassavetes style of lighting and figured it would be a perfect match for this video. Perhaps it’s nostalgia as that’s how I used to light my first videos. Make mistakes, learn, repeat mistakes. Let that be the only motivational catchphrase you’ll ever squeeze out of me.

In addition to the Mini Max led we rigged smaller led’s on a few of the bikes to give a little backlight for the  bikers. Most of the bicycles also had front and rear lights and Sanna and Elli were wearing decorative lights around their necks. Shooting black and white makes lighting a lot easier because you don’t need to match the colour temperatures of different lights. The biker in the front was carrying a smoke grenade that was set off midway.

We did eight takes but only finished five of them. One take was interrupted by an oncoming car and twice we had to stop because the playback was disrupted. That was completely our own fault as we didn’t have a proper place to put my phone in. It kept rolling around my feet in the cargo area and one time it fell out and almost got lost in the snow midway through the ride. The choreography with the bikers and dancers was finessed after each take. Out of the five takes we had two that were good and we ended up using the last take as that had the perfect timing. Watch the video below with some bloopers from the shoot.