Eleanoora Rosenholm’s Moskova metro music video has been in the making for well over a year. I made the first draft of the script already in March 2019 and we had the final script writing session with Mika Rättö in early November 2019. In total we had three shooting days. This is the longest shoot and edit I’ve done for a music video.

The first idea I had was to do a choreographed musical inside a train cart with a SWAT team dancing with Eleanoora. We evolved this idea with Mika Rättö and added complexity, story and more characters to the script. During the shoot a lot of changes were made, as is usual in my productions, but we had a good plan for the three day shoot. 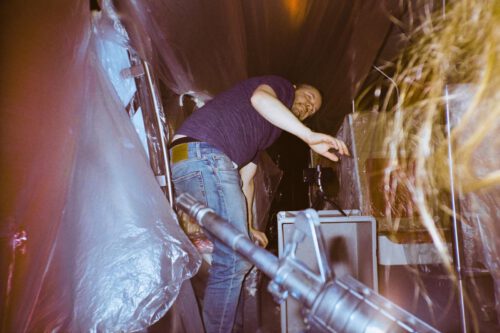 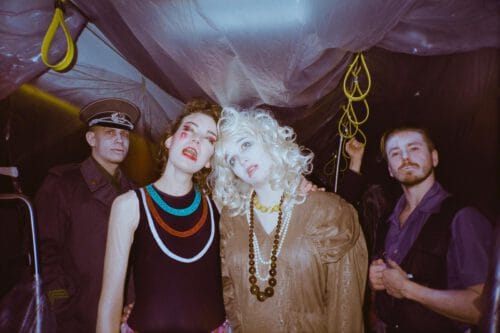 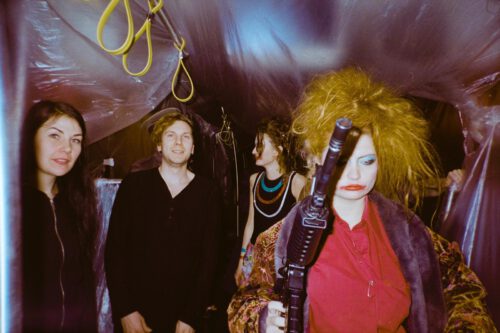 The first two days of shooting were spent inside a non functional tram car built as a showcase for the upcoming Tampere tramway. This was not our first choice though. We looked into shooting in an old 50’s museum railway car in Hämeenlinna but that turned out too expensive since the script required two full days of shooting. We lucked out and got a permit to shoot in a Tampere showcase tram car. It was a perfect solution since there was more space, amenities and it was logistically much easier. Although the location was great the tram car looked a bit too clean and new. After mulling over how we could make it look a bit more the part, I got the idea to use plastic protective sheets. My apartment buildings windows were renovated a year before and I had to use them cover all my furniture and really liked how they made everything look creepy. I bought a dozen of the plastic opaque sheets that come in 4×5 meter size. They weight almost nothing so just walking by makes them wave and move beautifully. We taped the plastic sheets throughout the whole tram car and it tied into the idea and the context of the script really well. 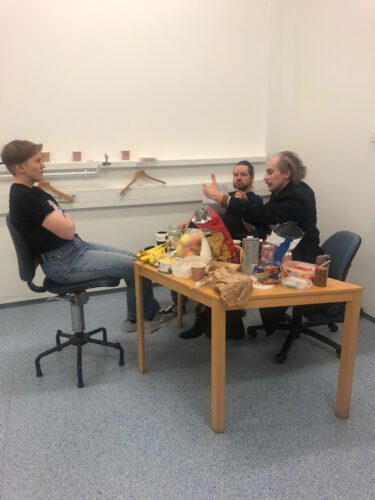 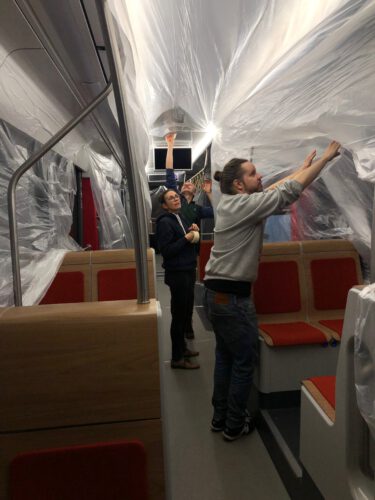 For lighting the tram car we used the relatively new Astera tube lights. Anna-Mari Nousiainen did extensive tests prior to shooting and programmed the lights. Astera tubes are amazing! They are battery powered RGB LED tubes and can be operated and programmed via an iPhone app. Basically you can program them to have any colour and pattern. You can make them flash or light up in sync or serial mode. Anita Ahola, Anna-Mari and Tuomas Bohm who worked on the lighting team spaced three Astera tubes evenly on both sides of the tram car and they were programmed to turn on and off in tandem one after the other. This created an illusion of the tram car moving. That and the plastic sheets waving as people walked by made us very happy about how it ended up looking. Not to mention that it was a very cheap way to cover such a big area. 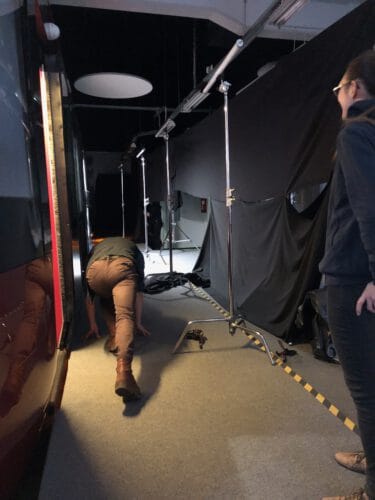 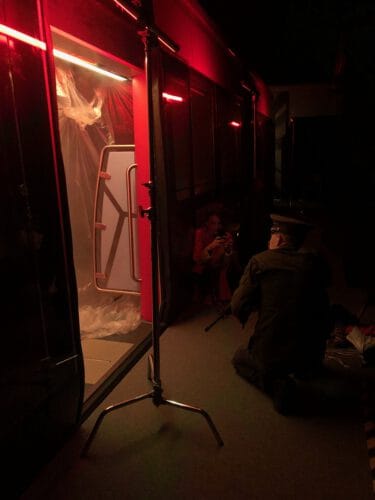 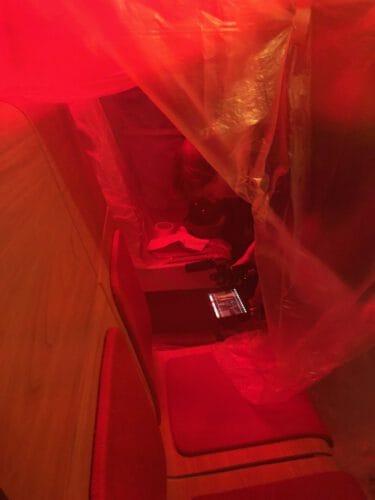 This was one of the first music videos I did not film myself. Instead Anna-Mari Nousiainen worked as the cinematographer. I felt that it gave me much more time to concentrate on the actors and I really want to keep making videos like this if budget permits. For the shoot Anna-Mari did a colour chart based and a mood board based on our discussions on what we wanted the look to be like. Although I had recently bought the Blackmagic Pocket 4K camera I was not fully comfortable using it yet. The tram car shoot was in late November 2019 and was filmed with my trusted Sony FS700 and the Odyssey 7Q+.

Anna Elo sourced most of the costumes and props according to mine and Anna-Mari’s colour charts and notes. The tram car scenes were choreographed by Diina Bukareva with whom I’ve worked on several occasions. Although the ideas were scripted beforehand we did a lot of improvisation on how people should move and how the invisible marionette movements should play out. Diina is a dancer herself and it was great to watch how she was able to pinpoint specifically how a marionettes hands and other limbs should move.

After the Tampere shoot I started editing the material. After I had the first draft of the edit ready we went over the script with Mika for the Helsinki subway scenes. We ended up filming in Helsinki with the Blackmagic Pocket 4K. I had already used it on a few more shoots and felt more comfortable that it would do a good job. It is also a much more lightweight and stealthy camera rig so it was a no brainer to use in the crowded Helsinki subway. In Helsinki the characters did their own styling and I think overall everything turned out amazing. We had a lot smaller crew and very little gear. We were stopped by at least eight subway guards to explain the rules of filming in the subway. It is allowed but you have to follow certain safety guidelines which are self explanatory. We filmed at the final stop of the subway and the platform was basically empty between the trains even though it was a Saturday.

I think the cameras mix perfectly and I am very happy with the image quality from both cameras. In the future I will be using the Blackmagic Pocket 4K more mainly because of the option to shoot in RAW and the very manageable file sizes that results in. With the Sony FS700 we shot in 4K Prores HQ and the two day shoot was about 674GB (2 hours of footage) in total. The one day shoot in Helsinki with the Pocket 4K in 4K BRAW Q5 was about 64GB (1 hour of footage). The difference is huge. The BRAW files are almost five times as efficient as Prores and I see no real differences in the quality. This alone is a great reason to use BRAW.

I did the title cards with After Effects. I know only the very basics and much of it was me trying out effects until I found out something I liked and using the wiggle code to animate them. We had planned that we’d grade the video together at my place with Anna-Mari but I ended up doing it alone because of the corona virus situation. We did however change some thoughts and frames over the internet to finesse the look. The black and white footage is found footage from the Moscow subway in the 20’s and 30’s and I also added some film dirt on top of everything for good measure and mood. I’ve been very excited to have had the opportunity to finally have all the resources (time, money, talents and crew) to try out everything I wanted. I also ended up editing the video much longer than I normally do just to make it as good as I possibly could. 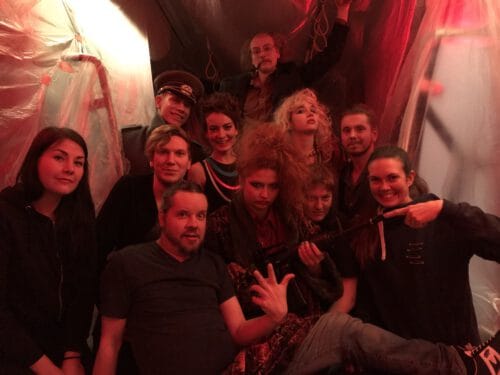 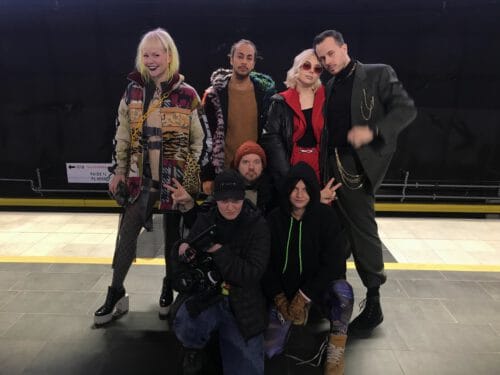