Barry Andrewsin Disko makes interesting music because it’s very playful yet melancholic at the same time. It is very inspiring to create images to. I wanted to write a story for this music video and maybe the very first time I’ve managed to extract all the images I had in my head into the video.

The indoor scene was lit with a 650W tungsten which I mistakenly underexposed at least two stops. I’m not that familiar with the Blackmagic Pocket Cinema Camera yet and it’s lack of a histogram or other exposure tools (par the peaking function to show clipped highlights) kinda threw me off. I’m not too happy about the lighting on that first scene for that matter. I only figured out how I should’ve lit the scene (another light from above and behind Jukka to give some separation from the wall) after the scene was shot. I wouldn’t have had the gear to do it anyways. Luckily with the Blackmagic Pocket you can push the exposure quite a bit so I managed to make it look decent.

Most of the video was shot with the Angenieux 17-68mm f2.2 zoom lens. It vignettes a bit when shooting at the wide end at the closest focus. This is due to the focus ring physically blocking the light when it pushes forward on the lens. The closest you can focus is 1.2 meters so in tight spots it is difficult to use. But I really love the look it has, especially on the long end. There’s a few shots in the video that bring out the best in the lens. The background out-of-focus parts are gorgeous, there’s a very nice organic feel to them. 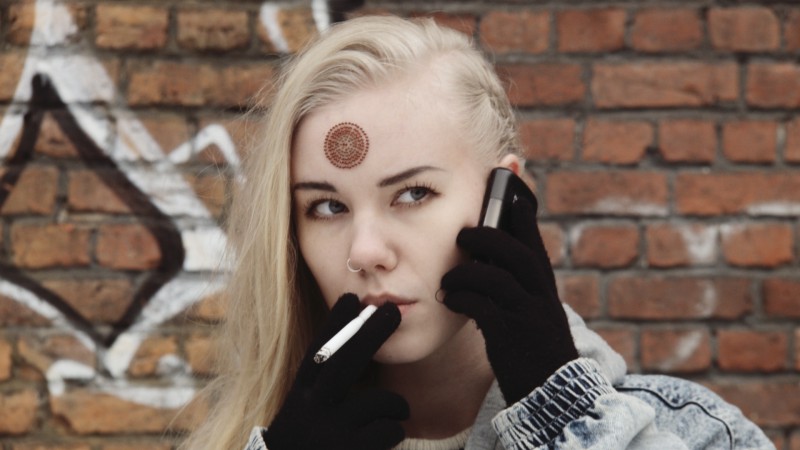 The Blackmagic Pocket is such a lightweight camera that I attached it to a mic boom to get a birds eye view of the scene with the invocation of the cat. I used a five meter HDMI cable to view the image on a monitor attached to the other end of the boom. Worked really well. I can imagine shooting pretty wild perspectives with this set-up.

We worked fast, the whole shoot happened between 10.00 and 17.00. We had seven locations. I knew all the locations well so I didn’t have to do any scouting. Burning the dollhouse next to a public park made my actor and assistant a bit nervous. The only one who was all chill was Siena, the girl standing next to it! They say that kids and animals are the hardest to work with in movies so I like to do that as much as possible! 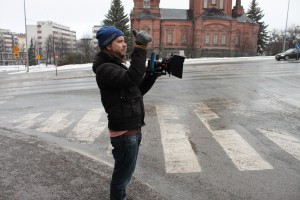 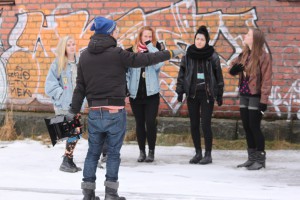 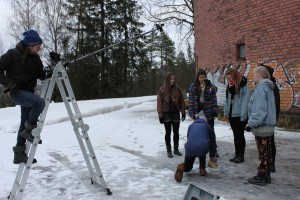 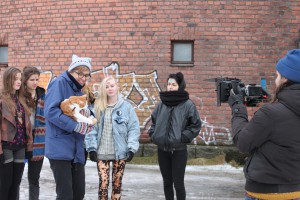 I really wanted to use color in this video. I decided that the main colors would be turquoise/blue, orange and red. This is the first time I’ve decided a scheme for a palette beforehand and actually stuck to it! I told the actors to wear clothes around this palette and looked for locations to complement. Everything you see was intentional except for the cool wall that Jukka walks by that says “Missä puut?” trl. “Where the trees?”. We were driving to our next location when we saw that and stopped by the road to capture the scene with one take.

Thanks to Wilhelmiina for the making of photos!

I’ll update my review about the Blackmagic Pocket Cinema Camera to tell more details about how it handles in real world shoots.