This is a second video made to promote Lau Nau’s new album Valohiukkanen (Fonal, 2012). The idea was to go out on the lake with a smoke machine and capture something that had very little color information. Snow, hopefully not too bright blue sky and Laura dressed all in white! I wanted to accentuate the white by adding slight rainbow colors here and there with these new 6 inch prisms that I had just ordered via ebay. They’re made for educational purposes to teach how light scatters into a rainbow of colors. But if you put them in front of the lens you get all sorts of weird effects. You can see them scattering light in a few shots and I especially like how they bring about all sorts of cool aberrations into the image.

I began shooting the video at 16:9 ratio but on the edit table I realized that it looks ten times more majestic at 2.35:1 ratio. This kind of landscape is just screaming for widescreen. Of course I had to reframe a few shots because it was shot originally in 16:9 but there wasn’t a single shot that didn’t benefit from the aspect ratio change. There was a handy letterbox templates zip file available online made by E. Hartford but his website is offline. So just incase you’re looking I’m making it available here for download.

On the frozen lake with gear

We shot the video in one day. About five hours on the frozen lake and another hour in the studio to get the final shots of Laura eating the sun. That shot is a composition of a starry sky photo taken by Anna-Mari Nousiainen and Laura. Laura was lit with only the light bulb in her hand and a UV light behind her to simulate the stars faint blue glow.

The dress Laura is wearing on the shoot was propably the most time consuming piece on the video. It’s handmade and designed by Anne-Mari Pahkala. She works in Tampere and has her own company and I can highly recommend her talent and vision. Check out Anne-Mari’s website here: www.annemaripahkala.fi. 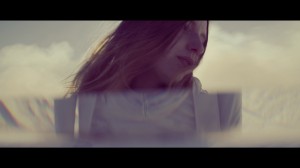 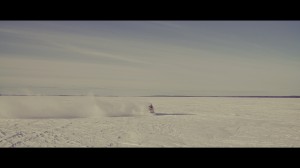 Here’s two 30 second teasers Anna-Mari Nousianen did at the shoot.