The Metabones Speed Booster seemed like a thing too good to be true. But once in a while I guess such things do happen! I’ve just recently purchased the Sony FS-700 camera so I immeadiately ordered the Speed Booster when I heard about it. What it does it converts the Super 35mm to Full Frame field of view and while doing this also adds one stop of light to the lens! So for example my Canon EF 24-105 f4 L IS USM lens which is cropped to produce a field of view 38-168mm on the Super 35mm sensor now basically becomes a full frame 24-105mm lens as well as f2.8 lens. How it works is the Speed Booster has a lens inside the adapter that acts as a focal reducer. That’s quite a lot of plusses there! 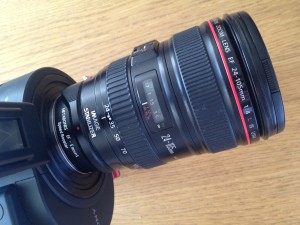 My Speed Booster arrived with the lens rattling loose inside the adapter and the infinity focus off. Either there’s a serious lack of quality control or it had loosened itself on transport. I emailed Metabones and they sent me this link to fix it. http://www.metabones.com/smart-adapter-operation-manual/155-infinity-adjustment-speed-booster-only. I’ve read of many people having this exact problem on multiple forums online so it’s definitely something Metabones is aware of and needs to address.

When you’re using electronic EF lenses the Sony FS700 screen will show you a reading of one stop more then the lenses iris is actually physically at. So for example if the camera shows a reading of f2.8 the lens is still physically at f4. What you need be aware of is that the depth of field you’re getting is not as shallow as you’d expect from a lens stopped at f2.8 as in reality the iris blades are still at an f4.

There’s a lot of reviews online and shots of charts that state the technical aspects of the adapter and there are some problems like slight chromatic aberration etc. In real world use I have not seen anything that would’ve bothered me. That being said I don’t keep it on the camera unless necessary. The way I see it there’s two occasions when to use it. When I don’t have enough light or when I need a wider shot that I could normally get with a Super 35mm sensor. There’s a very nice and relatively inexpensive EF to E-Mount adapter available from R.J. Camera that works very well. I would suggest you invest in both for maximum flexibility.

Here’s a few videos I shot using the adapter.

In this video most of the shots in the beginning are shot with the R.J. Camera EF to E-Mount adapter and Samyang 24mm T1.5, 35mm T1.5 lenses. The shots in the car and the girls running to see the moon at then end would’ve not been possible without the Metabones Speed Booster though. The shots in the car were lit with an iPad and the last two shots with the vinyl moon are available light that’s made entirely possible by the Speed Booster’s added sensitivity. The added field of view from the Speedbooster also really helped inside of the car.

This whole video was shot with a Canon 24-105 f4 L IS USM and Metabones Speedbooster as I didn’t have the Samyang 24mm or 35mm lenses yet. At f4 the zoom lens would’ve not been sensitive enough. With the Speedbooster adding an extra stop of light it was just about enough. I would’ve propably shot at f2 with if possible just to get a bit more light though. The added field of view from the Speedbooster helped with this shoot as well.

In my opinion the Speedbooster is a must have equipment if you’re lacking speed or need a wider field of view. I’ve found myself using it on every shoot I’ve had since I bought it.