First video from the new album by Barry Andrewsin Disko “Kuka siellä?”. Available on CD/LP and soon on digital.

We had a very small crew for this video. Here’s a good hint, if you’re shooting in front of suburban drug store with masked men, realistic looking guns and wads of cash you should definitely call the emergency services and let them know about it. They’ll be very pleased and actually it is common practice, something we do every time we use smoke on our shoots. Just so you don’t end up paying for the fire departments unnecessary visit or better yet you won’t end up under siege by 20 police men. 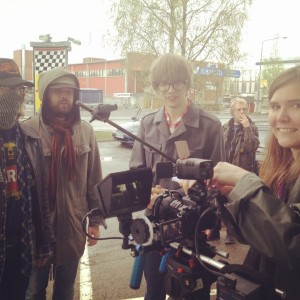 I had my fingers crossed for a rainy or a cloudy day for this shoot. The only light I used was my small camera top LED light to open up Jukka’s face a little bit. We used a c-stand to mark his heads place so Jukka would know where to put it when he came in front of the camera.

Ninni who shone in the Seremonia video in the tormented daughters role worked as a prop master on this video. She had done really realistic looking 20 euro bills and loads of cool wads of cash! And you know what, you can’t photoshop bills! If you try it will recognize them as such and tell you it’s prohibited to photoshop currency! probably sent out an email to local police as well… In the end you can’t really see the wads or the bills which is a shame. Gotta do another video with them more prominent though!

Jukka made a great appearance as himself in this video. He said he had a lot of practice trying to buy train tickets from VR. Mikko and Ville (also of the Seremonia-fame) you see as the bank robbers. I had in mind that Ville would be driving the car but it needed a bit of precision to get the car to stop in the right place, so we decided it’s not probably a good idea for him to try driving for the first time ever…