Steel Mammoth’s music video was shot with my brand new Panasonic GH2 and Sony monitor. The Sony monitor turned out to be a big help in focusing and also in judging the skin tones as well as the exposure. I will write a full review of the GH2 in the upcoming months but I have to say I’m really impressed! I don’t see any colour banding or artefacts on the footage. It also handles color grading very well. My GH2 isn’t even hacked yet! The Vimeo compression actually looks quite bad compared to the original files! 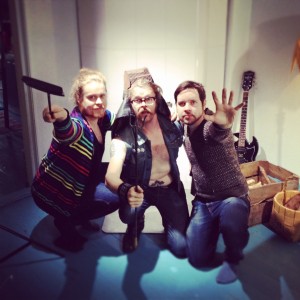 Alpo Nummelin did the lights. We used a classic german reporter set-up with two Sachtler tungsten 150W lights. Alpo changed the lights to daylight (5600K) by adding a CTB gel. This was purely because we wanted the snakes light ball you see on the table to have a warmer color. It also turned the snakes tummy into a bright golden glow that looks awesome! We also used my SWAT led camera light to add some light on Garfield Steels face as he moves in between the lights and also when he pushes the pitchfork and hand towards the camera. The Swat led turned out to be a little green. I hadn’t noticed this before on other shoots. I definately wouldn’t have seen this problem unless it was for the 5″ Sony monitor. The genius that Alpo is he fixed it by adding a minus green gel in front of the led light! I gotta say I was impressed! He did some magic grip work too that he tried to explain to me over the phone, I should’ve written it down to remember. 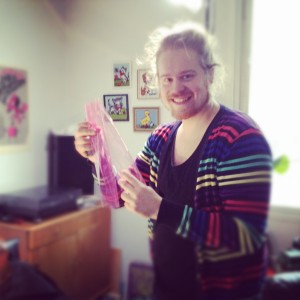 The whole shoot took about 2 to 3 hours. Although it was an easy one shot set-up. We’re getting much quicker and efficient with Alpo. Practice does make you better! Oh! The pizza we had after the shoot… Amazing! Yummy! I’m finally over the fact that I got food poisoning from Restaurant Napoli in 2003. Recommended. 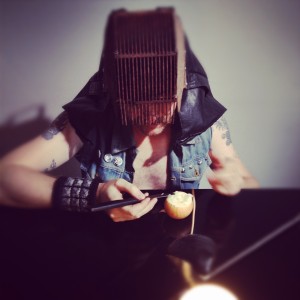 PS. Can you spot the Twin Peaks homage in the video? :D