When I first received the track Keijukaisvalssi I had a hard time figuring out how to circumvent a literal approach. We met with Sanna and Pekka from Litku Klemetti and Sanna explained the backstory that she had for the new upcoming album titled “Ding ding dong”. The album tells the story of Hullu-Sanna (trl. Crazy Sanna) and her adventures. The character is the one singing the song Keijukaisvalssi (trl. Fairy waltz). This opened up a lot of possibilities and we started throwing ideas of how to approach the music video.

I’ve done my share of content that is based on purely visuals but during the past years I’ve really wanted to try to include as much narrative and ideals into all of my work. I love the fact that Litku Klemetti is one of those bands who put deeper thought into the lyrics and who try to portray their own ideals and thoughts. The script for the music video is very much a collaboration between me, Sanna and Pekka. Together we came up with a story of Hullu-Sanna transitioning from a non expressive hermit to an artist after meeting a merry band of like minded souls.

I love the fact that the band was willing to try an idea of a loosely narrative cinematic music video. The shoot was done in Kuhmo, Sanna’s hometown, and the video was filmed over a period of two days that included travel from Tampere to Kuhmo and back again. We shot the final Kuhmo market square scene on the first day during the evening and the lip sync parts on Sanna’s parents backyard. The prologue was done during the same night at Sanna’s relatives cabin. Next day we did all the bits where Hullu-Sanna meets the band and gets a new outfit from the Kuhmo flea market. All the locations are closely tied to the real “origin story” of Litku Klemetti which is the reason we travelled all the way to Kuhmo instead of doing it anywhere else.

Anna-Mari Nousiainen did all the lighting again as per usual on all my videos nowadays. We shot all of the video with the Sony FS700 and Odyssey 7Q+ except for the overhead body rig shots of Sanna being carried by the folk in the final scene. For that scene I built a body rig from some leftover grip stuff and attached the Blackmagic Pocket Cinema Camera 4K on it. It actually cuts super well with the FS700. 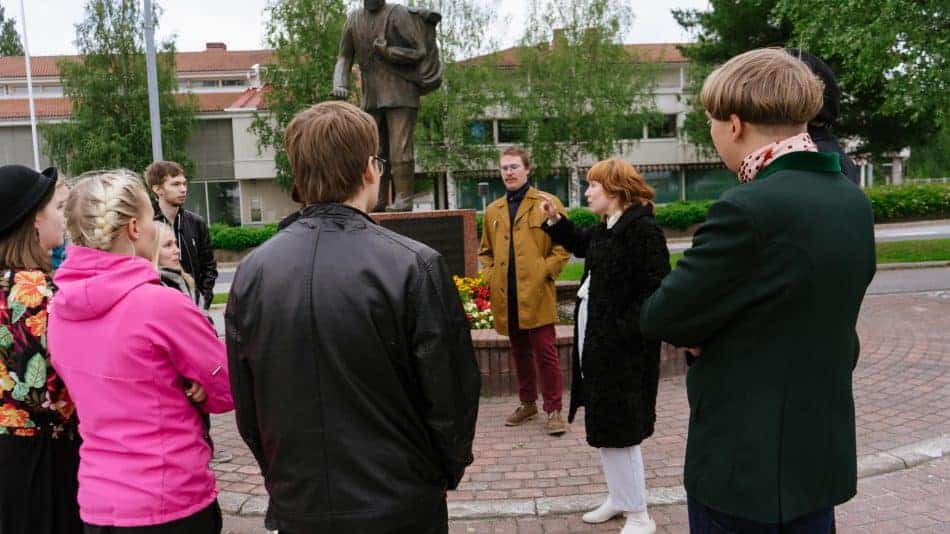