The Goodiepal Equation documentary is now available for free in Youtube!

The film is also available to rent and watch without ads at the Fonal shop. The documentary is also released on a USB drive with a massive five hours of extras including a brand new 20 minute Epilogue where we see what’s up with Goodiepal and his pals after the filming of the documentary. Browse to Fonal online shop to purchase the USB and rental: https://fonal.com/shop/the-goodiepal-equation-usb/. There is also a new Goodiepal Equation t-shirt available with design and coloring by Ilona Lehtonen and pencil drawings by Kalle Rantakallio.

The Goodiepal Equation is my first feature documentary and it follows Kristian Parl Bjørn Vester, a Danish/Faroese musician/artist. The documentary was filmed during 2011-2017 and it was edited by Eeva Tuomi between 2015-2017.

I did a short 30 minute documentary on Goodiepal in 2012 in my A Day in the Mouth series. That was when I decided it might be a good idea to do a longer piece on Goodiepal. I spent the first five years just filming him and in 2015 Eeva Tuomi came on board as the editor.

Technically the film is very very simple. There was no lighting and I used whatever camera I owned at the moment. I begun with the Panasonic GH1, then the Panasonic GH2, Blackmagic Pocket Cinema Camera and finally the Sony A7s. This a natural progression but it also gives the periods a certain look that changes alongside with Goodiepals ever changing appearance. My favorite camera was the Blackmagic Pocket that shoots Prores. You can color correct material that is severely underexposed or white balanced wrong. That happens quite often in documentary work. The A7s is as good and even better in many ways (lowlight for example) but I really prefer to use a camera that has a deeper depth of field. The full frame sensor of the A7s gives you an image that is just too shallow and you have to constantly keep checking the focus.

I quickly realised there are no second takes when working with Goodiepal. Everything had to be captured as it happened. I bought a GoPro camera that we attached to Goodiepal’s bike and he also used it to film other things on his own. The fact that the camera had no screen and Goodiepal could not see what he was filming gave me an access to his personal life that led to some fantastic intimate moments. These moments would not have happened had I been there.

Eeva edited the film for over two years and I must say I am extremely happy with how she handled the footage. There was almost 60 hours of material. 15 hours of just stuff Goodiepal had shot with the GoPro stuck on his bike. The first two years was just hard work. In the last few months we restructured the edit and the chronology of events was mixed up a little bit. This was a pivotal moment in finding a narrative to the cut and having a flow of events that we were happy with.

Loads of people helped with getting extra material and I’m very grateful for that. We also licensed some footage from Danish broadcast companies. That was very expensive. It was equally amazing to be able to do surround sound that Samuli Ala-Lahti realized with his sound design. So in the end the film turned out to be much better than what I hoped for and it seems it will have many more screenings than the originally planned one at a local cinema.

We are now submitting the film to as many film festivals as we can and hopefully next year we will have many screenings!

A word from the director

The Goodiepal Equation documentary film reveals a small part of Goodiepal’s personality and mystery. It shows its protagonist as both an uncompromising artist and a loyal friend. Goodiepal explores the boundaries of society’s rules. He shatters the definitions of art in his works and actions. Goodiepal is by nature impenetrable, yet consistent. That is why people often either love him or hate him.

Goodiepal himself forms an essential part of his theories. Indeed, the Goodiepal Equation is as follows: “The further a message travels over space and time, the more value it adds to its content.” One might think that this documentary has been made on the off-chance of Goodiepal later becoming an extremely famous artist and theorist. This, however, is a ready example of the paradox that is Goodiepal – it will never happen. If nothing else, it will be hindered by Goodiepal’s personality. For all his overbearingness, he is not merely a master manipulator; his actions reveal true altruism and empathy. He pays for rooms for the needy to work and live in, he helps refugees and donates large sums of money to charity.

Even though he is the self-proclaimed man for the new millennium, for most of us he is also beyond comprehension and imagination. You will feel like Alice in Wonderland having a conversation with the Cheshire Cat. That is why following Goodiepal must be done with a mind as open as Alice’s as she stepped through the looking glass.

The documentary portrays a man who is more than an artist or a theorist. It shows us someone who is battling – in his very personal way – his problems and illnesses. Goodiepal’s attitude in the face of adversity is the main reason why I chose to make this documentary. His loyalty towards his friends is demanding but also very rewarding. In the words of his best friend Poul Erik: “He is ready to die for his friends.” 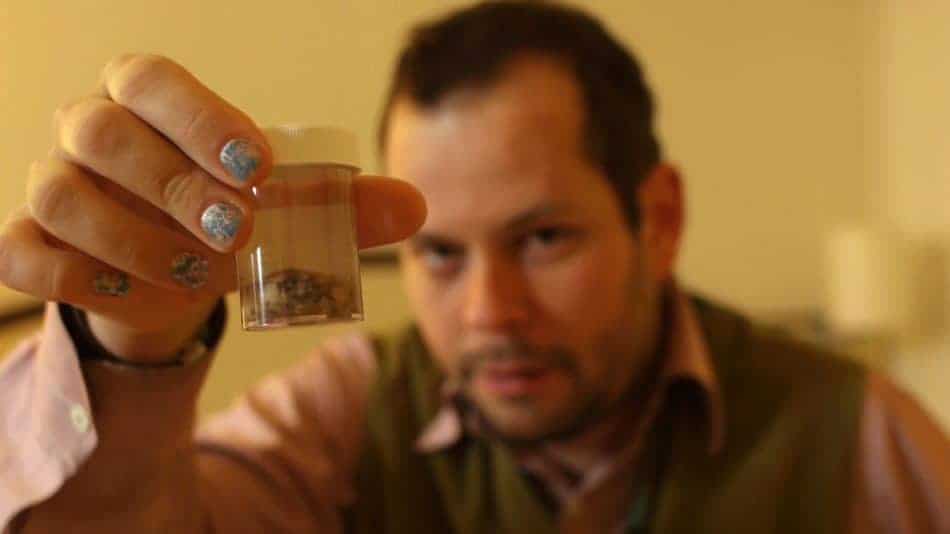 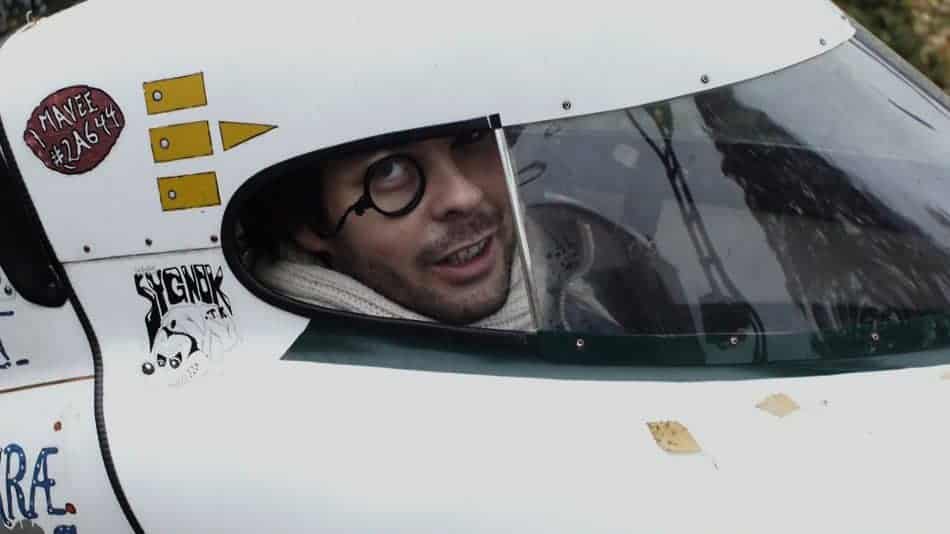 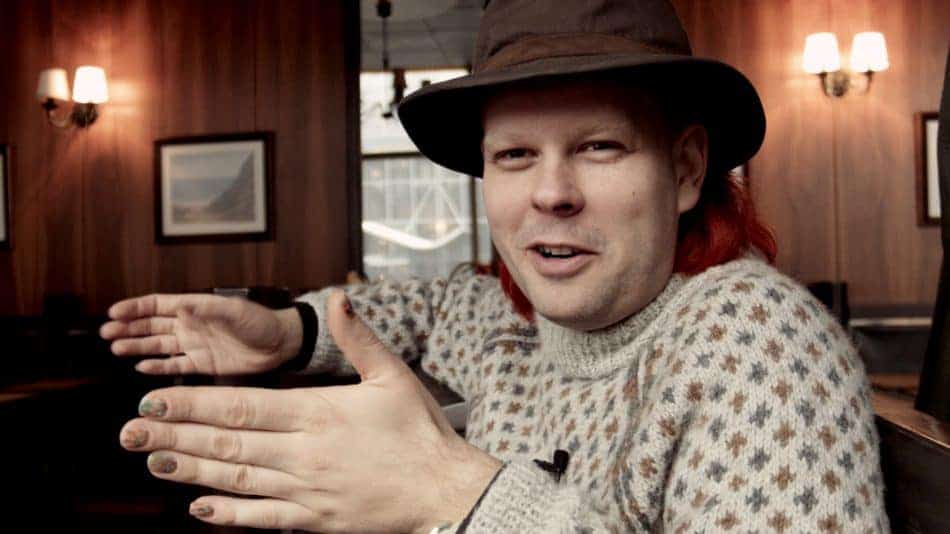 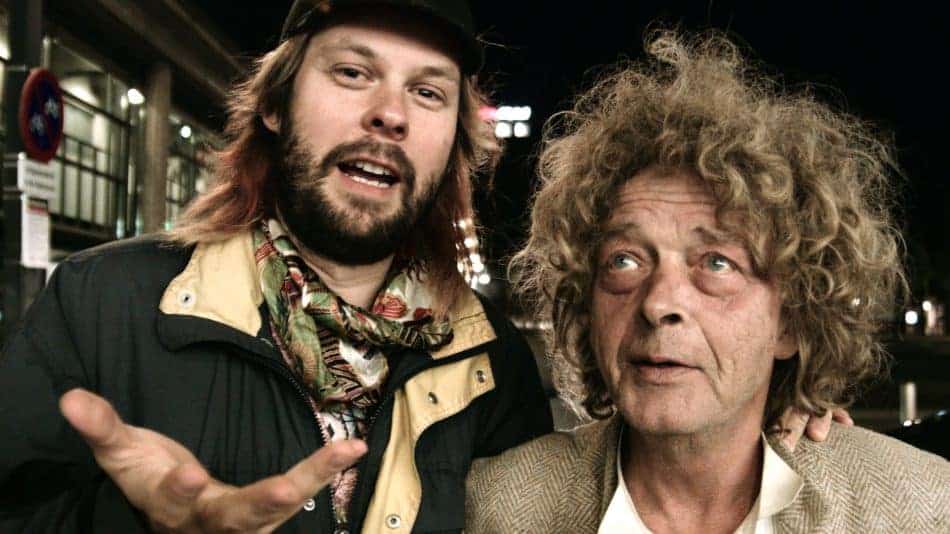 Goodiepal (real name Kristian Parl Bjørn Vester, b. 1974–76) is a Danish musician, performance artist, lecturer and activist operating on the fringes of society. Goodiepal rides thousands of kilometres on a self-built bicycle that he uses to power his shows. He has released a record with a genuine 500-krone banknote embedded in the vinyl – priced at 250 kroner. Goodiepal has put together an exhibition for the National Museum of Denmark comprising all his material possessions, and he creates his art outside of customary institutions and norms.

Goodiepal’s best friend, the former 1960s rock star Poul Erik, is another true eccentric, a hoarder living among things he has collected from skips. His dream is to own a piece of each item ever produced by human beings. Goodiepal considers Poul Erik his partner in crime, although his audience would prefer to see him without him.

Goodiepal’s life is shadowed by Huntington’s disease, an inherited degenerative disease of the brain that has driven men in his family to suicide. Doctors find odd tumours in his head and he begins to misplace and forget things. Many of his closest friends are likewise affected by illness.

Goodiepal’s activism turns increasingly radical and he drifts further and further away from social safety nets. Goodiepal challenges us to reflect on our view of the world. What remains of us if we only exist to serve the system? What is THE GOODIEPAL EQUATION? 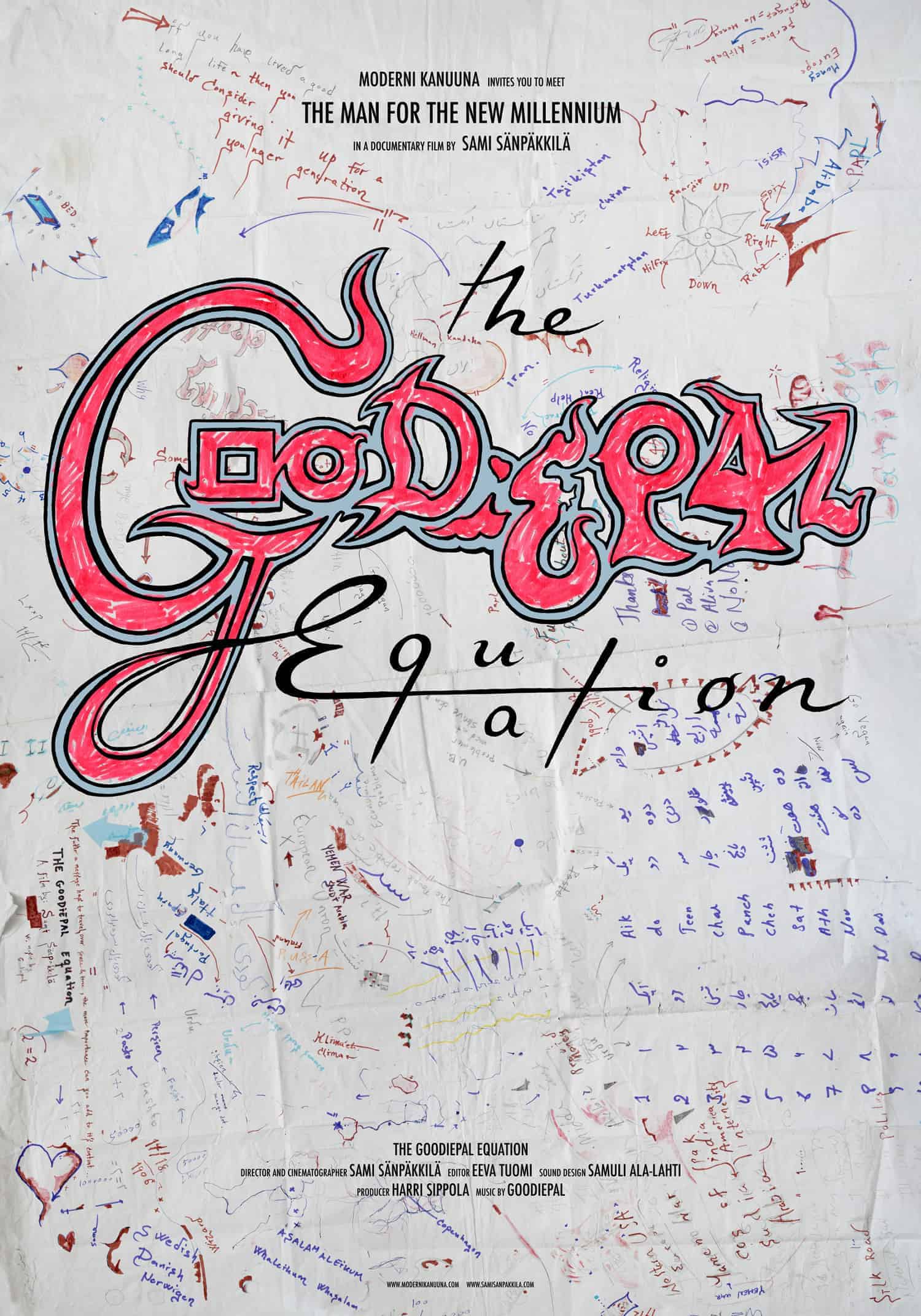