Risto Turvaluola music video idea spun from a suggestion by Risto. He wished he wouldn’t have to be in it and suggested that there would only be words on the screen corresponding to the instruments in rhythm and volume. Well, I thought this was a nice idea but not necessarily something I wanted to do myself. Too much computer hassle! After thinking about it for a while I got the idea to use Risto’s face as a correspondent to the instruments and it was a surprisingly easy to pitch to Risto. Me: “You don’t want your face in the video? How about 20 layered faces?” Risto: “Hmmmm… Sure!”

The shoot itself took about five or six hours. We had a black canvas as a back drop and a 300W Tungsten with some diffusion on it. Front light was a 30W LED above the camera. I wanted the look be quite harsh with very little shadows. We shot with the Sony FS700 and the new SLOG2 picture profile internally on the camera. I’m still getting used to the profile and since it’s really not meant to be used with the poor internal AVCHD codec exposing it is a little bit trickier then with the other profiles.

You don’t really see what you will get and image looks really bland and milky on the monitor. It’s really easy to loose all your shadow detail if you try to make blacks black. With the SLOG2 it’s better to have a bit of extra detail in the shadows. Unfortunately I didn’t do this enough and really hit the limits of the profile. Luckily it was just about there and I managed to get a good look. 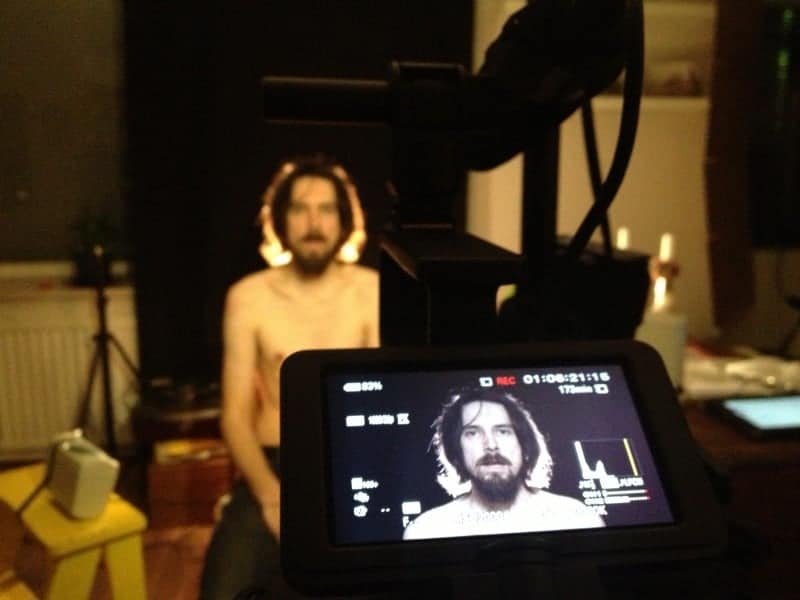 I’ve just begun using Premiere Pro (and transferred to a Mac). I used Sony Vegas Pro for over 12 years so there’s many little quirks and irritating things that I have to get used to. If you want to import clips each to their own tracks on the timeline you need to this manually one by one, you can’t reorganize video tracks once you’ve imported them, if you want to change a stereo audio track to two mono tracks you have to do a series of steps.

Basically I’ve been googling for simple things and working around these issues for a lot of the time. I’m getting used to it though and there’s plenty of good stuff in Premiere as well.

We had 24 takes, each instrument was assigned a movement or an action that Risto performed throughout the song. So we basically had 24 six minute shots. These I synced to the song with Pluraleys 3 which only took about five minutes. By hand it would’ve taken a few hours so I can really recommend Pluraleyes if you do this sort of stuff.

The synced audio was then exported to Premiere for editing. I changed each tracks opacity to “screen” blend mode and used fade in’s and out’s to give them the wanted rhythm. Everything happened on the musics terms so I was merely the button pusher on this one!